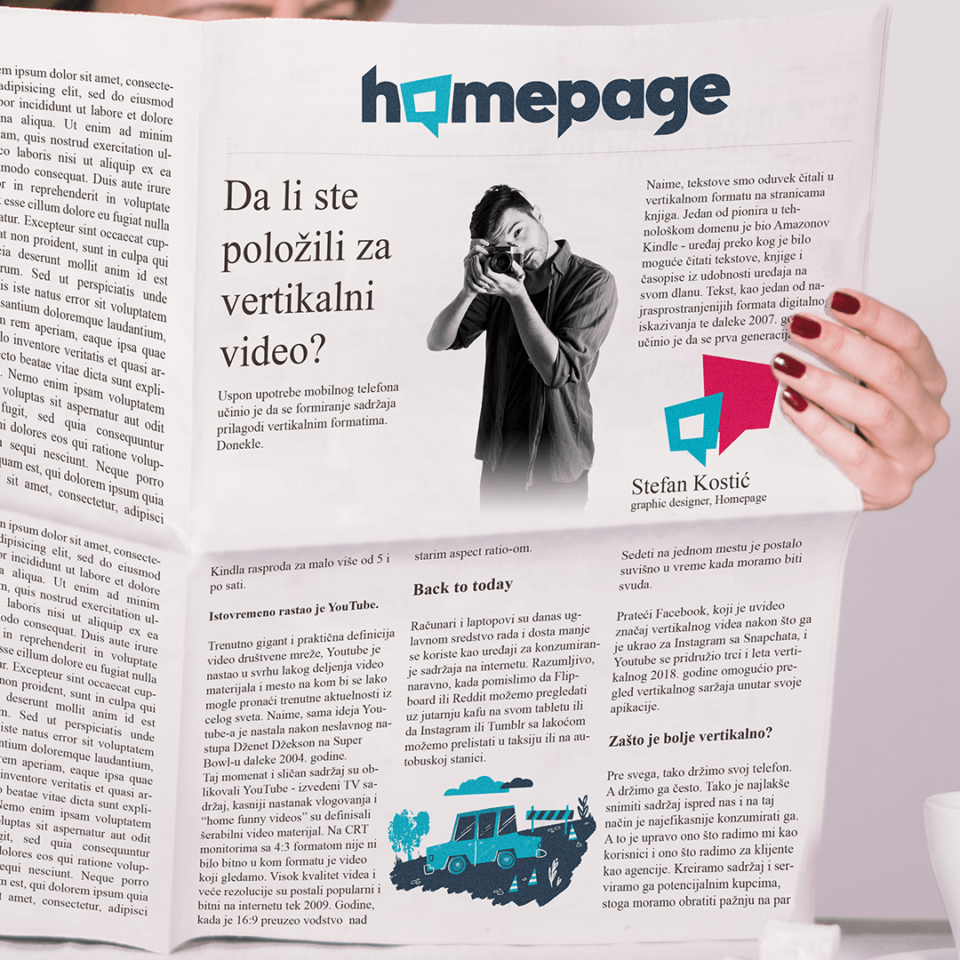 Did you pass the vertical video?

Do you know that there is 70% chance to have me in your palm?

The rise for the need of mobile phone usage made the formation of the content to be adjusted to vertical formats. To some extent.

Namely, we have always read the text in the vertical format on the pages of books. One of the pioneers in technology domain was the Amazon’s kindle- a device that made it possible to read texts, books and magazines from the convenience of the device on your palm. The text, as one of the most widespread digital display formats in the distant year 2007, has made the first generation of Kindle to be sold in less then five and a half hours.

Currently the giant and practical definition of social network, YouTube was created for the purpose of easy video sharing and a place where you can easily find current news from around the world. Namely, the very idea of YouTube was created after the inglorious performance of Janet Jackson at Super Bowl in 2004. This moment and the similar content shaped YouTube- the performed TV content, the later birth of vlog and funny home videos, defined shared video material. On CRT monitors with 4:3 format it was not important in which format was the video we were watching. High quality video and higher resolutions became popular and important on the internet only in 2009. The year when 16:9 took the lead over the old aspect ratio.

Computers and laptops today are mostly means of work and they are being rarely used as devices for consuming content on the Internet. Understandable of course, when we think that Flipboard or Reddit we can check with our morning coffee on our tablet, or that Instagram or Tumblr can easily be checked in taxi or on the bus station.

To sit in one place has become a surplus at the time when we have to be everywhere.

Following Facebook, which saw the significance of the vertical video after stealing it for Instagram from Snapchat, YouTube also joined the race and in 2018, and enabled the vertical view inside of its application.

Why is vertical better?

First of all, that is how we hold our phone. And we hold it often. This is the easiest way to record the content in front of us and in that way it is most efficient to be used. And this is precisely what we do as users and what we do for clients as agencies. We create content and serve it for potential buyers, and therefore we have to pay attention to a couple of important things:

Is our product quality?

High resolution and appropriate format as technical aspects and the story with which the target group can be identified as an emotional moment are what catch our eye at first. If the ad we are creating is something that will pop-up to a person on Insta story, what we do not want is for him or her to tap the right side of the screen because the content we are showing bounces from the sandwich in which we are in.

How easy it is for someone to simply “drink” what we are serving or simply- how much the idea and the concept are adequately presented is ultimately one of the most important factors in the story. Simply, did we interest that person to “order more”?

How easy it is to consume it

In the end, why is it important to see the video as a vertical format? Simply, the shortest path is straightforward and disturbance of the set way is something that none of us likes. In case that due to work on the road we make an unplanned tour of the city through a couple of side streets- we will not be happy even if we arrive at the destination. Therefore, if we show the content to someone in horizontal format, the very idea that we have to rotate the phone is exhausting, and if the gyroscope starts to bug and the video does not rotate when we turn our screen, the easiest way there is to keep on scrolling. And there we loose- the person, view, potential interaction and in the ultimate case- we did not sell ourselves in the right way.

Vertical video is a very important element that must be set at the very beginning. If we are discussing how the campaign should look like, what color and shape it is, until where its headlights are reaching and how much it is visible during the ride, before all of this it is necessary to set the most efficient route from our start to the goal. “Make my video vertical” is not a good option in the postproduction.

– 4K means comfort. With the high resolution video you have the option in postproduction to further frame the scene and animate according new ideas or depending on the client feedback you are not closely limited by the material that was filmed.
– Speed is important- 60 or 120 fps are in this case frame rate to which you should aim. If we have a higher speed, the end product has better chance to have better quality.
-Static. If we are presenting ourselves to the person holding us in its palm, the movement control should be given to that person. Therefore, the handheld is not always the best option. If the scene requires movement, the flow is obtained by gimble and fluid motion of the camera, while for all other recording situations the tripod is your best friend.

Now, do you think you have all that is necessary to pass the vertical ride?

P.S. In case you do not have it, no big deal. Just put your seatbelt and tell us where to go.

The impact of web design on sales