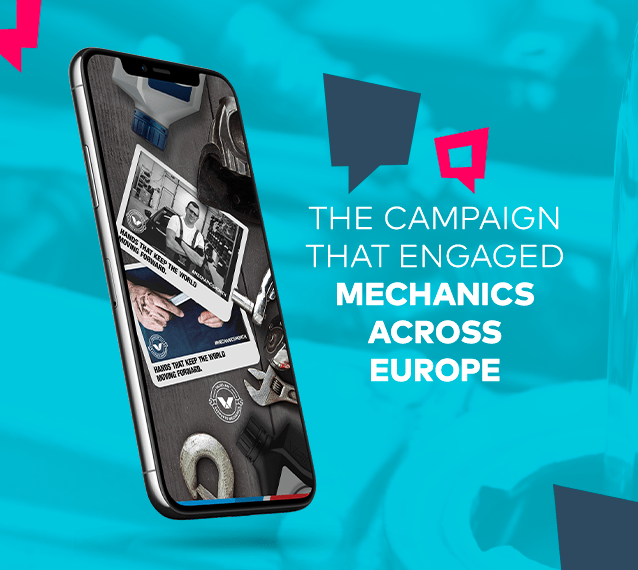 Campaign that engaged mechanics across Europe

Valvoline, as a manufacturer of motor oils, dedicates every March to its most loyal partners - mechanics. This year's focus of the campaign on a global level is based on the premise that mechanics always move us forward "Mechanics keeps us forward". The task of the agency was to adapt the campaign for the European market and to devise a way to encourage the target group to interact and participate in the campaign itself.

Since that the main tool of mechanics are their hands that simbolizes their work, dedication and years of experience - we place them in the center of communication with the tagline: “Hands that keep us moving forward”.
That is why the hands of the mechanics were the constantly present motif through the photo and video campaign that was realized on Valvoline Europe Facebook and Instagram accounts.

In the teaser phase of the campaign, we presented the mechanics through content that talks about the years of their experience with the help of photos of their hands and years of experience in the business.

This was followed by video materials through which we represented members of this craft from Sweden, Germany, Spain, Italy, Serbia, the Netherlands, Belgium, Portugal, Hungary and Poland. The mechanics talked about their first repairs, favorite cars, moments they remember, favorite tools, etc…

In this way, the brand directly involved the target group, which became part of the campaign, and mechanics the authors and transmitters of the message.

The crown of the campaign was the activation by which we engaged the community and invited mechanics to share photos of their hands during the work. In addition, we have created branded stickers with motifs close to the target group and Valvoline products.

The video content had almost 300,000 views during the campaign, while we reached up to 900,000 people through announcements. All in all, the performance of Valvoline's Facebook page for Europe during the Month of Mechanics was on average 500% better by all metrics compared to the previous month.

16 Giphy stickers recorded more than 896 K views in the first month of the campaign, while after three months that number was 1.800.000 views.

This campaign was awarded as part of the Web Excellence Awards for 2022, among 1.200 entries from 39 countries around the world.

You can see an example of the content of the campaign HERE - and if you want us to achieve great results with you - contact us! :)